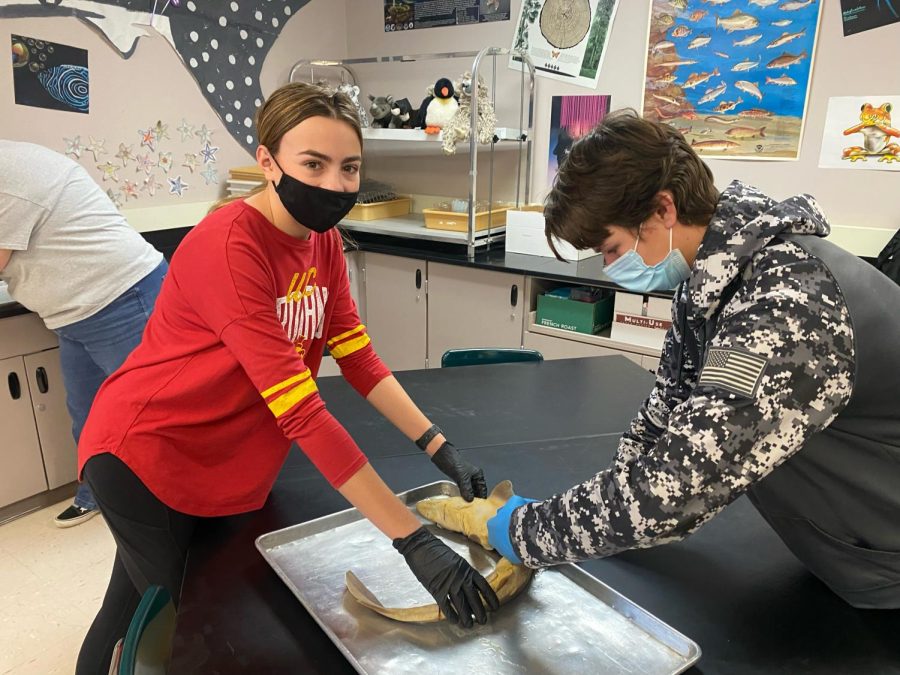 Mountain Vista’s aquatic biology class had a “jaw-some” experience dissecting a dogfish shark during class. Aquatic biology is a semester-long course offered for juniors and seniors to acquaint them with the biology and ecology of freshwater and marine environments. The class is taught in a collaborative environment that promotes discussion.

Earlier in the semester, students dissected a squid to learn about the anatomy of mollusks. The shark dissection, which was facilitated by science teacher Lori Schwendeman, is held each semester to investigate how sharks’ marine anatomy contributes to its underwater efficiency.

Mrs. Schwendeman has taught aquatic biology for 10 years at Mountain Vista. “When we have learned all about shark anatomy, shark physiology, shark conservation, and everything, [the students] see the shark for the cool thing it is,” Mrs. Schwendeman said. The class has also dissected a squid and studied living sea urchins and coral.

Julia Shai Garza, 12, decided to take aquatic biology because she once lived on the coast of Australia.

“My favorite part [of the dissection] was the eye of the shark because it has a marble in the middle of it,” Garza said. Garza loves having Mrs. Schwendeman as a teacher and says she makes learning about aquatic habitats fascinating.

Throughout the dissection, Caroline Strickling, 12, enjoyed studying the brain of the shark and doing a deep dive into different parts of its body.

“I [decided to take aquatic biology because I] want to study marine biology,” said Strickling.