Who is Call Me Karizma? 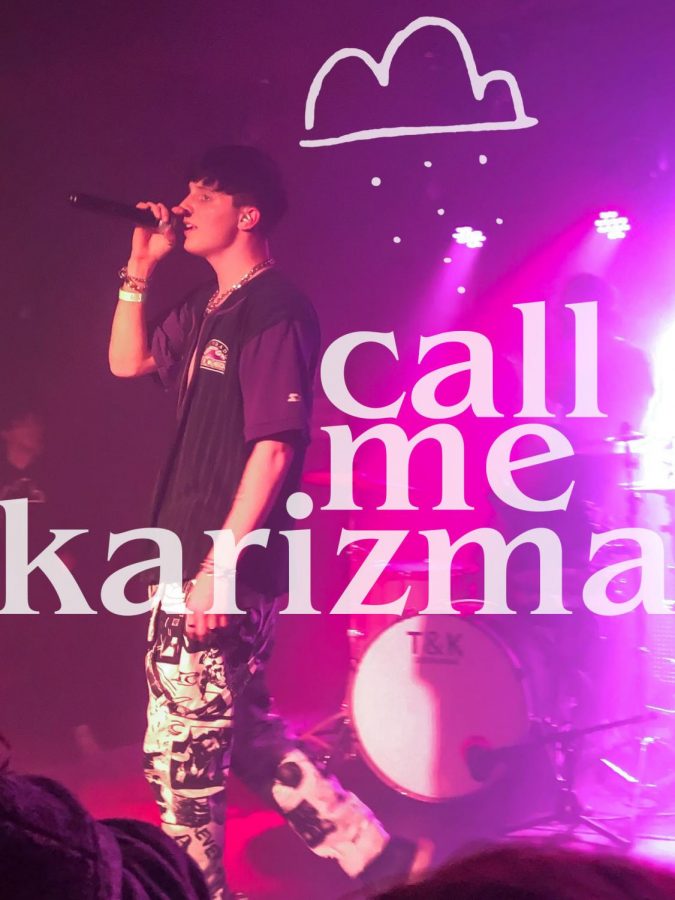 Call Me Karizma performs at the Larimer Lounge on March 10.

“I speak for the kids that I help with my music, let’s do this.”

Morgan Parriott has always been an individual with visions of change and ingenuity. From the small 8,000 person town of New Prague, Minn., Parriott has always been a little different from the norm. Though he received criticism in high school for being different and chasing what seemed like impossible dreams, he went on to make a name for himself in the world: Call Me Karizma.

The first time Pariott played his music for a crowd was at the young age of 16. Within a couple of years after his first show, he had earned a spot on a 60-day American tour, where he was an opening act for musicians Blackbear and Mod Sun. Since 2015, the year of the tour, Blackbear has become one of the most popular hip-hop artists worldwide. Little did Call Me Karizma (also known as just Karizma) know, he would end up performing as the main act on his own headlining tour.

Karizma’s interest in achieving his destiny of becoming a musician stemmed from his interest in world-renowned rapper, Eminem. Not only has he picked out some of Eminem’s traits to apply to his sound, Karizma added his own special touches to his music to make it stand out amongst other artists.

“I don’t really have a genre,” Karizma said. “I think it’s more like rock music, but just with rap infused [into it.] It’s [primarily] guitar and drums, that just sound like rock music.”

“I started listening to [Eminem] at a young, young age and I related to him, so I was like, I want to make music just like him,” Karizma said. He appreciates Eminem’s complete transparency and risk-taking, which has translated into many of his own songs.

“[Eminem] did stuff that no one would nowadays,” Karizma said. “That’s why he’s the greatest, because he said things people were afraid to say.”

One song expected to spark controversy is his 2018 song, “Johnny,” which is the story of a school shooter who goes on a killing spree in his school, ending with his high-achieving classmate Cindy at the end of the barrel. He was advised not to release the song, as it could have been taken the wrong way, being from a school shooter’s perspective.

Karizma recalled his management team telling him: “We can’t put this out unless you at least change [the tone] and make sure that people know that it’s like about mental health, not just glamorizing a shooter.”

Regardless, he took a chance and released it.

Later, on his album “The Gloomy Tapes, Vol. 1,” Karizma uses his fourth track, “psa: johnny” as a statement to explain the release of the song. In simple terms, he expresses his belief that mental health is an important factor in the minds of youth today. He believes gun violence and mental health go hand in hand.

“As a society, we have ignored countless signs of mental illness and blanketed these issues with prescription pills and stigmas that only polarize these kids who need help the most,” he said. “No boy, hardly yet through puberty, would ever do what Johnny did without being mentally ill and drastically affected in a negative way by our society.”

Mental health has always played an important role in Karizma’s life, which has translated deeply into his career and lyrics. His advocacy for mental health has never been something Karizma has hidden from fans and friends. Fans bond with him through his words, beautifully written with feelings of not only sadness but also healing. The community he has built is one based on acceptance, kindness and awareness.

Not only has Karizma built his empire of fans from his euphoric sound and deep, meaningful lyrics, but also the deep compassion he shows his supporters.

“Don’t [pursue music] for the wrong reasons,” Karizma said. “The wrong reasons like making money and trying to get girls and all that because that’s what not to do.”

After every show, and even between some tour dates, Karizma holds meet and greets at malls and parks. All he truly wants is the love and support from fans. He’s not all about the money.

“When I meet fans, and I see they have tattoos of my lyrics and stuff, knowing that they’re down to ride forever, is the greatest thing,” Karizma said. “It’s like you’re just creating a family throughout the whole world with music that I just make in my bedroom.”

Karizma has been and always will be driven by the connection between himself and his supporters. He focuses on the positive people in his life and disregards those who try to discourage his undeniable hard work.

“The only people that drag you down are those people that are either jealous of where you’re at, or they’re just mad that they haven’t like taken the leap to get there,” Karizma said. “No one can really bring you down but yourself.”

As far as Karizma and his team know, an album is in the works, with his newest song set for release on March 27. Though what’s to come beyond that is currently unknown, Karizma hopes to continue adding to his fanbase and growing individually.