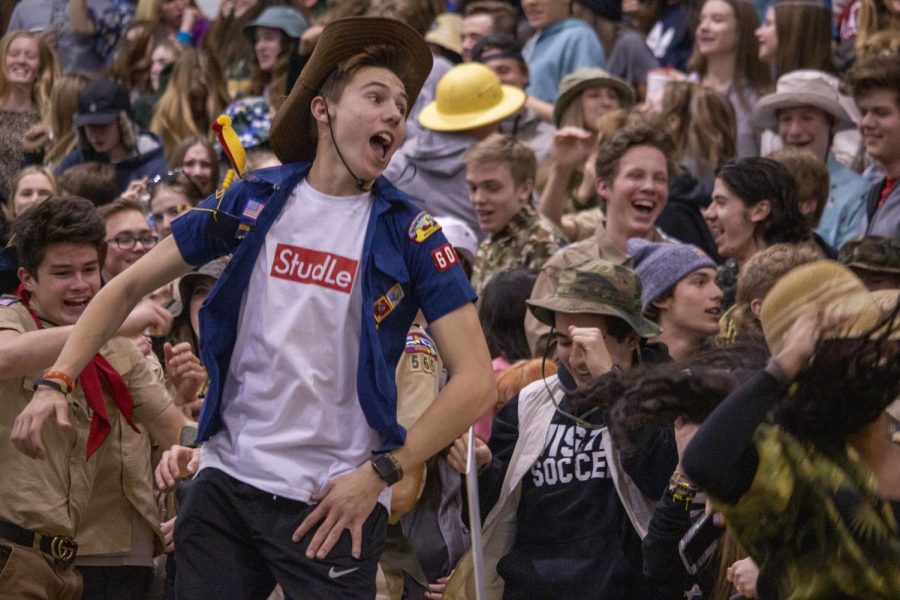 Lions and tigers and bears.. Oh My! The final day before the well-anticipated closing assembly had students dressed for a safari. Students and faculty packed the bleachers at the Wish Rally during advisement then crowded the stands at the varsity men’s wrestling match later that evening. Despite the incoming snow storm, many members of the Vista community took part in the day’s restaurant fundraisers, grabbing food at Raising Canes and splurging on ice cream at Ritas.

Inspired by Je’Moni’s favorite Broadway musical, “The Lion King,” the ‘Safari-Out’ allowed students and faculty to unlock their inner animal. Many people walked down the halls sporting binoculars, safari-hats, and an endless amount of cheetah print.

“I like [the safari-out] more than the ‘Jersey-Outs’ that we did last year,” sophomore Emma Johnson said. “Dressing up as the Lion King or safari people show [Je’Moni] we’re here for him and we’re just doing what we can to try to help him out.”

After students geared up for the safari, the day kicked off with Smoothie King, Starbucks and other snacks as students and faculty filled the commons and main gym for the Wish Rally. As a class advisement, raising $100 got students into the Rally as did paying $5 for an individual. Events such as basketball and volleyball took place in the main gym and a photo booth was set up. Included in all the activities was a video shot for Je’Moni.

‘No Place for Hate,’ a new club at Vista, made their debut with their first project at the Wish Rally. Members of the club created a banner for students and staff to sign and passed out wristbands, as a way to encourage awareness around the school.

“I think it would be cool to [become] be tradition because it’s usually a message our Wish Kids spreads,” librarian and club sponsor Kim Cox said. “Just acceptance and kindness and so this lines up perfectly.”

The idea of ‘No Place for Hate’ being involved with the Wish Rally started with Assistant Principal Rob Cegile who works closely with Student Leadership. According to Cox, Ceglie knew how full the event would be, which became a great opportunity for the club to spread the word. The impact theme for Thursday became ‘No Place for Hate’ as a result.

As the day neared its end, the bleachers were filled again with a crowd ready to watch the men’s wrestling team compete against Chatfield Senior High School. With regionals just weeks away, high pressure accompanied the wrestlers during the match. Seven wrestlers competed in their respective weight classes. As the matches continued, more Vista wrestlers pinned their opponents with ease.

“Going up on the mat, is always nerve-racking,” junior Mason Lowery said, “But once you get up there, you just got to leave it back in the stands.”

“I think we did a great job. It was an awesome way to end the season,” Lowery said.

Despite the excitement and anticipation built for the last day of Wish Week, Thursday ended on a concerning note. At 4:36 a.m. Douglas County School District announced over Twitter that on Feb. 7, school will be closed. Almost immediately after, the Vista community questioned what would happen to the assembly.

“We know. We will figure it out,” StudLe sponsor Lindsey Jaffe tweeted shortly after the news broke. “Stay tuned.”

After some confusion, Jaffe sent a follow-up tweet that outlined what the decided plan was.

“Thank you all so much for your patience and support! We have so many different moving  parts we had to consider over the past 6 hours but ultimately Saturday from 9:30 to 10:30 is the best option! In the end it was what was best for Je’Moni  and his family! See you tomorrow!”

Following the tweet, Principal Micheal Weaver sent out a schedule to the Vista community. It explained that the Wish Week assembly would take place on Saturday Feb. 8, from 9:30 a.m. to 10:30 a.m. Doors will open at 9 a.m. for the seniors and juniors, and will open at 9:10 a.m. for sophomores and freshman. For seating, seniors will sit on the floor nearest to the stage. Juniors will sit on the floor mid-court to back. Sophomores sit in the west stands, while freshman will sit in the east stands.