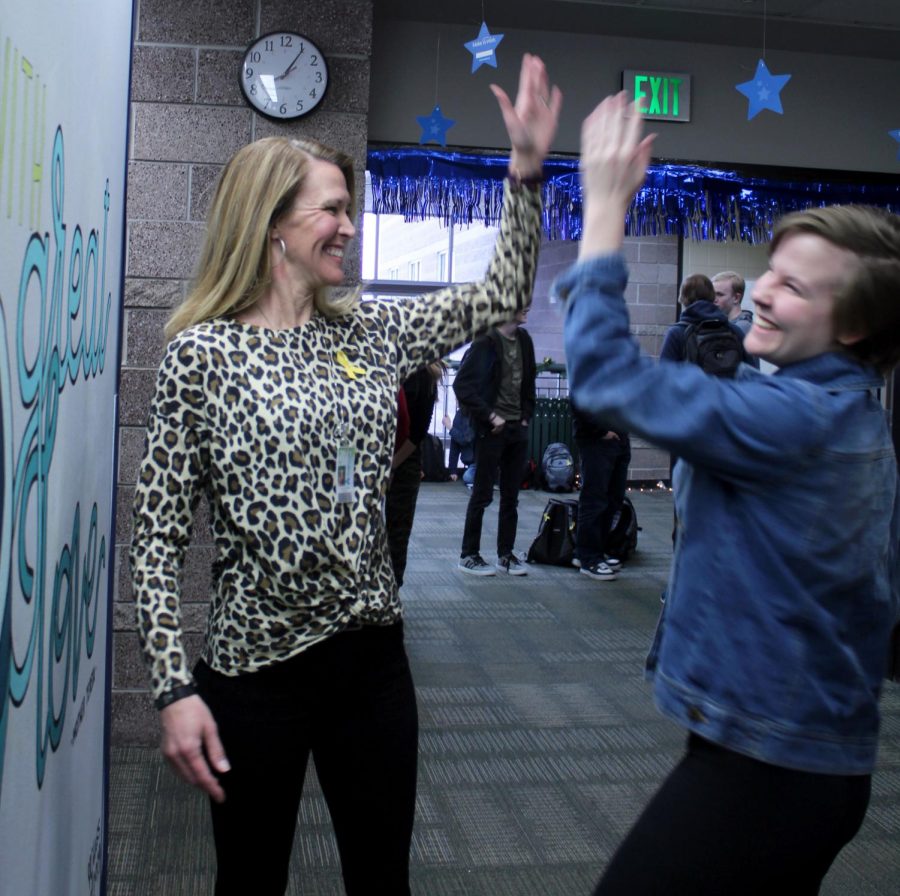 As students of Mountain Vista walk through the halls, it’s not easy to miss the joy exploding out of the upper 300s from science teacher Jennifer Haskell’s classroom.  Haskell spends every Friday standing outside her classroom giving out high fives. She calls it “High-Five Friday.” Creating a fun environment both inside and outside the classroom, Haskell’s positive energy lights up a room as she tries to make every day a good day.

“I just thought it [High-Five Friday] might be a fun thing to get people energized and to be positive,” Haskell said.

Spreading positivity is her main goal for everything she does, and it comes across to almost every student she encounters.

“She has this different organized and overall extra positive energy, like you want her to be your teacher. You want to be around her,” sophomore Catie Owens said.

Haskell’s energy is what makes her unforgettable, both as a teacher and as a person. However, it’s not just her energy that has impacted her students. A few years ago, Haskell was diagnosed with stage zero breast cancer. She uses this experience to fuel how she teaches and how she lives.

“She’s been through a lot in her life, so she’s really able to connect with her students,” senior Jackson Bergloff said. “And coming from her background it makes her a strong teacher,”

The overall energy that comes out of “High-Five Fridays” gets felt across the hall and from all different types of students.

One of Vista’s main goals is to spread good vibes and make a positive difference, which is clearly evident through Wish Week, but Haskell achieves that goal every week of the year.

“It’s so fun.” Owens said. “It’s such an easy and simple way to spread positivity.”

Though Haskell has popularized “High-Five Fridays” it wasn’t her idea from the get-go.

“I have to say though I kind of swiped the idea from Mr. [Cory] Hawk  because when I taught next to him he did ‘Fist Bump Fridays,’” Haskell said. “So last year I saw him do that and then I was like, ‘Wait, I think I’m going to start something like that over here in this neck of the woods.’”

Haskell has high hopes for what will come out of “High-Five Fridays.”

“There are some kids I’ve never had in class before, and they’ll walk by and if I forget they be like ‘High Five Friday!’ Sometimes it’s Tuesday, and they’ll be like ‘How ‘bout a high-five Tuesday!’ and I’m like, ‘Okay sure,’” Haskell  said. “Some kids say I look forward to this all week and that warms my heart. So, I’m hoping to just create that positivity around the building.”