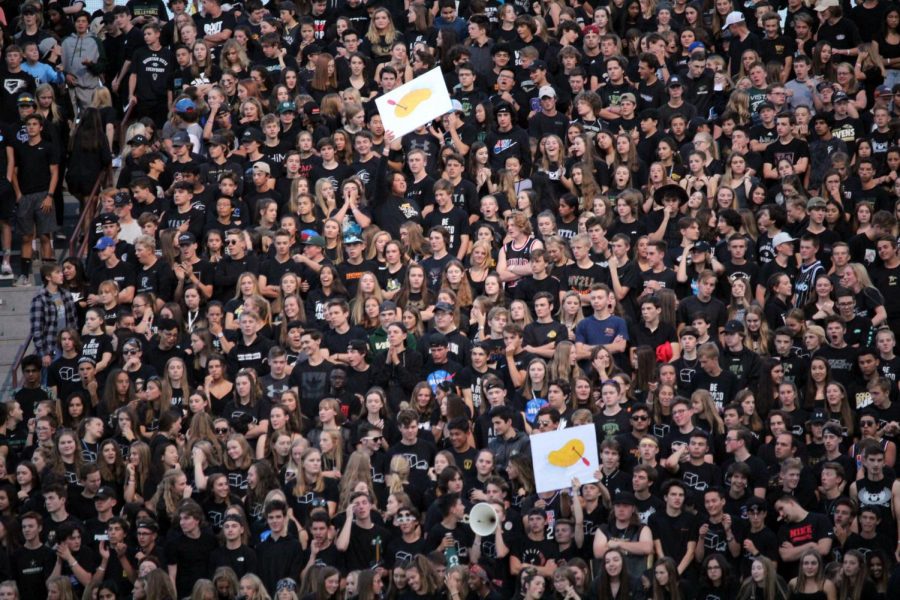 The final day of homecoming week was a day full of school spirit. Whether at Taste of Vista, the long-awaited football game, or the closing assembly, the excitement was palpable.

“I think [homecoming unifies the school] because it puts everybody in one place at one time with one purpose,” assistant principal Heidi Schuster-Beckman said.

The halls of Vista were a sea of black, as students sported black outfits.

The closing assembly was the perfect event to wrap up a fun-filled week. At approximately 9:50, students began filing into the gym. After performances from the marching band and jazz choir, the final assembly was finally able to commence. With a variety of events, such as potato rolling, school cheers, and man poms, there was much excitement to be had.

For seniors Cole Mason and Chris Sawaged, the man poms’ performances were the best part of the assembly.

“One of our friends… asked us if we would like to be a part of the man poms team, and we were more than happy to join,” Mason said.

“I think there’s more class competition than I’ve seen in a while,” Schuster-Beckman said.

This competition was highlighted by a scoring system, in which each class earned points for school spirit. The final tally put seniors in first place with seven points, juniors in second place with four points, and one point for each the sophomore and freshmen classes, putting them in third place.

Just a few hours after the closing assembly wrapped up the week, the festivities continued as students gathered for the annual Taste of Vista homecoming event. A wide variety of vendors such as Chick-Fil-A, Stella Blue, and Gigi’s Cupcakes provided students much more than the ordinary school lunch. “Usually for the underclassmen all we get is subway or whatever’s in the cafeteria,  so this is a great way to get new food on campus,” sophomore Andrea Best said.

Later that night, the cheer tailgate kicked off. “It’s really fun because you get to see everybody here, and help support the football team, [especially] before the big game,” freshman Ashley Hoery said.

At 7:00, with a huge crowd to cheer them on, Vista’s football team took to the field. “[The game] has been really fun, the crowd’s been really interactive,” sophomore Alexa Wegerson said “[Cheerleaders] help boost the crowd and I think the football team sees that and they get pumped too.”

At halftime, Vista was down 14-0. However, the team managed to score four touchdowns in the second half and held Rocky Mountain to a score of 21 points. After a nail-biting game, Vista came out on top with a final score of 28-21 for their first win of the season.