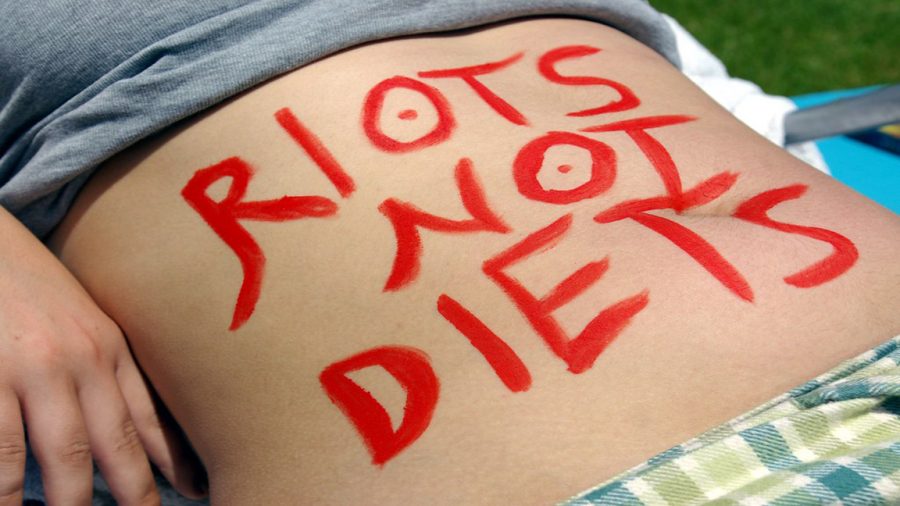 There has to be a reason why the word ​die​ appears in​ diet​. The words itself is only suppose to mean what something eats, but after decades of normalizing diet trends, people recognize it as the way to lose weight. In today’s society, dieting is normal. Losing weight is considered the ultimate success even if the dieter was only drinking juice, only eating protein, or checking the calories before eating a meal. Weight loss stories may look like a dream come true, but they don’t allow people to see the consequences of dieting. Addi Jones, of Kansas, began dieting when she only twelve. Her dieting turned into a long battle with an eating disorder leading to her death in early Sept. 2018. Although dieting may not lead to an eating disorder for everyone, they do cause an unhealthy relationship with bodies and food. Diets are a negative trap for individuals because the messages from diet culture deteriorate self-image, diets are unsustainable, and diet industries promote false claims.

The subliminal messages of dieting creates a society that values weight loss— also known as “diet culture.” Diet culture has influenced people to believe what they weigh makes them who they are. In a 2008 report on “Body Image, Eating Disorders, and the Media,” medical doctors Marjorie Hogan and Victor Strasburg found that “thinness has become associated with social, personal, professional success.” The cliche story of the fat kid who gets bullied, loses weight, and becomes successful is ingrained in too many minds. People can be desperate to feel comfortable with themselves, but don’t realize that the scale does not determine self-worth. ​

New York Daily Mail​ reporter Christine Roberts revealed that “The desire to diet has no age minimum. Approximately 80 percent of all 10-year-old girls have dieted at least once in their lives.”

Time​ magazine reporter, Alexandra Sifferlin, explains “When people are asked to envision their perfect size, many cite a dream weight loss up to three times as great as what a doctor might recommend.”

Dieting shouldn’t disrupt someone’s piece of mind to the point where they feel like needing to lose 60 pounds instead of ten. Diet culture advertises weight loss as something that will better your self-acceptance, but it’s really a colossal mistake that is not worth destroying your self-love over.

It’s New Year’s Eve, and you’re planning your resolutions. You decide to stick with the same weight loss goal you’ve had since 2012, but you’re questioning why you can’t just lose that weight already. The answer? Diets are unsustainable and cause weight gain. Metabolic suppression is the brain’s regulation of a person’s ideal weight range, known as a set point, which is determined by multiple factors.

Personally, after all the years of being so mad at myself for gaining the weight I had previously lost, I finally understood that my body needed more than what my diet gave me. Once I stopped dieting, I stopped the trap of weight gain, restriction, weight loss, binge, weight gain, repeat. I’m not saying don’t be healthy. I’m saying that diets are not what makes a person healthy. Living a balanced lifestyle, where a person doesn’t feel intense shame and guilt with food is healthier than any diet.

The Eating Disorder Foundation located in Victoria, Australia, identifies dieting as the number one risk factor in developing an eating disorder (Dieting Risk Factors). At any stage of a diet, a person is engaging in disordered eating thoughts and behaviors. Small dieting tendencies can result in major mental and physical health consequences. Restricting what you eat or cutting out certain food groups has created a negative attitude towards people’s relationships with food.

Author and experienced fitness pioneer, Daniel Remon, writes, “Going out with friends, socializing, trying the latest new restaurants, celebrating birthdays, having a few drinks. THIS is life. So we need to ENJOY life. Not feel we are being deprived or cheating our way through it to accomplish a specific weight loss or fitness goals” (Remon).

A diet is an inanimate thing; you can’t hurt its feelings. Life shouldn’t be rigid to the point where you can’t eat cake at a birthday. It’s better to enjoy the cake in the moment then be deprived and binge on it later.

The diet industry’s idea of health is linked to the trap of weight loss. For example, in early May 2018, Kim Kardashian decided to promote Flat Tummy Co’s appetite suppressants. In the photo she is sucking on one of the lollipop suppressants and even uses, #suckit, to encourage her audience to purchase the product. This advertisement promotes the idea that by eating candy, you can lose weight— another false claim by the diet industry. Even worse, it influences Kardashian’s audience that in order to achieve a “Flat Tummy,” they must eat less: a false statement that can lead to risky, unhealthy behaviors. Like these lollipops, most diet products such as pills, cleanses, and supplements don’t work, yet thousands of people buy them.

Author and professor at Rutgers University, Dr. Charlotte Markey said, “The fact that [diets] fail 98 percent of the time means big money for the diet industry. In 2010, dieting industry profits were estimated to be $60.9 billion.”

Diet products are often advertised as a quick way to lose weight and imply that weight loss is easy. If dieting fulfilled the industry’s claims, people would only need to do it once. Instead, it’s a business of wanting and expecting people to fail, so they spend more money.

“The diet industry does not make money off you feeling healthier, though. It makes money when you feel poorly about yourself and want to be thinner” (King).

The diet industry is like Regina George from “Mean Girls.” A pretty girl that makes you want to be friend with them, but once you become their friend you’re miserable. The diet industry works around the idea that when a diet doesn’t work, then ​you did something wrong and not the diet. It’s an industry built upon dishonesty and desperation.

On the other hand, there are people who believe that dieting is not a trap, but instead will improve your quality of life. David Zinczenko, a health and fitness professional, argues different ways dieting is helpful.

I must admit that Zinczenko is right in saying certain foods do make a difference in people’s moods or energy levels; however, there is no need to go on a diet to eat those foods. When people begin to eliminate “unhealthy” foods, they are creating a mentality of “me vs. food.” If a person wants to have stable moods they need to allow themselves to understand their bodies.

Some people share the belief with Zinczenko that people “go on diets to look good, and to feel confident.” While it is true that people probably want to go on a diet to look better, it doesn’t mean they will feel more confident. People should have the intentions to help their health, not change themselves, and especially not to just lose weight. It’s also possible to be healthy no matter how your body appears.

Emphasizing the belief that dieting will make people more successful, Zinczenko confirms that in a recent study by ​International Journal of Obesity,​ it appeared employers were negatively influenced during their hiring process when they would see a picture of an overweight person. Granted, this can happen; it does not make it justifiable. In fact, this belief is a clear form of discrimination and weight stigma. If someone has the needed qualities for a job, his or her weight should not impact the result. This is the same for race, age, gender, or socioeconomic status. Believing that dieting will equal success is a trap that will stop a person from living their life.

In the world there are people who are seeking more health and happiness, but those who believe a diet will help them achieve their goals are the ones who get caught in a diet’s trap as a consequence of a culture that promotes negative self- image, the unsustainability of dieting, and the diet industry promoting false claims. In many cases, people wish they could change their insecurities, but diets are not the way to do this. There is no reason for people to compare themselves when there is no rule on what a person is required to look like. Life has too many experiences that don’t need to get interrupted or taken away by dieting. No matter who you are, what you like like, where you come from, or your gender you are susceptible because diet culture is everywhere and is infectious. Live your life, and don’t diet.

Roberts, Christine. “Most 10 Year-Olds Have Been on a Diet: Study; 53 Percent of 13-Year-Old Girls Have Issues with How Their Bodies Look.” ​Nydailynews.com​, 9 Apr. 2018, www.nydailynews.com/news/national/diets-obsess-tweens-study-article-1.1106653​.